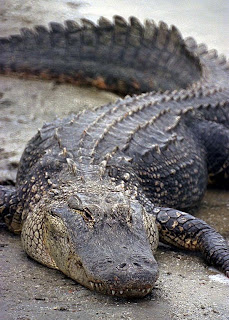 A recent accident at a coastal golf course in South Carolina raises questions for us regarding the possibility of landowners incurring liability as a result of acts by wild animals on the landowner’s property.

On Thursday, October 8, 2009, a 77-year-old man lost his lower arm after he was bitten by an alligator on a coastal South Carolina golf course. The Fripp Island man was playing the Ocean Creek Golf Course about 3 p.m. Thursday when he was attacked. The man was picking up his ball when a 10-foot alligator pulled him into a nearby pond. The man’s golf partners were able to free him. Workers from Tracks Wildlife Control in Beaufort killed the alligator and removed the man’s arm. He was taken to the Medical University of South Carolina in Charleston in hopes of reattaching his arm. His condition was unclear early Friday.

Although there are no South Carolina cases directly on point, general principles of common law provide a basis for the analysis of this issue. “Wild animals” are known in legal terms as “ferae naturae.” This terminology refers to animals “of a wild nature” which are undomesticated and untamed.

[1] According to the doctrine of ferae naturae, a landowner may not be held strictly liable for the acts of wild animals on his or her land.[2]

The doctrine of ferae naturae, however, does not bar liability for claims based on a landowner’s negligence.

[3] In negligence cases, courts have applied the doctrine for the general proposition that wild animals exist throughout nature, they are generally not predictable or controllable, and therefore, without more, they are neither the property nor the responsibility of the owner or occupier of land on which they are found.[4] Thus, where a landowner does not “keep” a wild animal, but, rather, the animal naturally exists on his property the traditional rules of standard of care in premises liability apply. As such, where a landowner is aware of the incidence of wild animals on his property that may pose danger to others on his land, it is in the best interest of the landowner to warn of the presence of those wild animals.[5]
[1] Black’s Law Dictionary, 635 (7th ed.1999).
[2] 4 Am. Jur. 2d Animals § 62 (2009); see also Estate of Hilston ex. Rel. Hilston v. State, 160 P.3d 507 (Mont. 2007); Gamble v. Peyton, 182 S.W.3d 1 (Tex. App. 2005).
[3] Id.
[4] Id.
[5] See Palumbo v. State Game & Fresh Water Comm’n, 487 So.2d 352 (Fl. App. 1986) (holding that (1) State and university not taking measures to prevent alligators from moving from state park to adjoining recreational park and not providing alligator spotters were clearly discretionary decisions, not supporting liability, and (2) student’s total disregard of clear warnings and regulations present at recreational park was sole proximate cause of his injury).
**** Hat tip to Logan Wells, new C&L associate, for her work on this article.
This article is not intended to constitute legal advice. For definitive advice regarding the law of landowner liability for the acts of wild animals, consult an attorney in your jurisdiction.